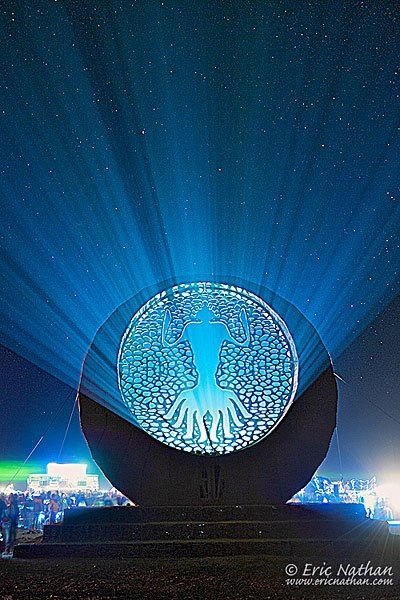 The year I became the Captain of the Burn!

Nowadays we set-up entire theme camps on the Binnekring / Playa but my first year I entered by gifting my talent of graffiti to the organization. They put this out in the newsletter and many many Capetowners and Joburgers came to me with their art cars. I picked a few and decided to come early to Capetown, started spraying over there and continued in the desert.

These crazy ass, pyromaniac, seriously disturbed people became instant new friends. My main project was the Buggalux (a 3 mt stretched out VW beetle made by Charl and Tony). I stayed at their place and they took me under their wings. It turned out to be the petrolheads and pyro technicians of the event. On the way into the desert we accidentally hit a springbok, one of the rules say: Radical self Reliance. So we gutted the animal and eat him that same night on the Braai. That was my pretty hardcore introduction to the event. They turned out to be making lots of stuff for the movies industry (like Mad Max, Chappie etc) meaning we have a lot of nice toys/cars to play with in the desert. There are enough ‘hippies’ on the playa so this camp of blacksmith, builders and bluesy tunes was perfect for my home base.

Every year we try to team-up with our mates of Camp Anvil, our camp Walhalla is much more colorful and inviting though but together we have a complete and cool contrast next to each other overlooking the madness happening on the Binnekring. Few words that come to mind is Professional bullshit, leave your problems at the door and now it’s time for catching up on smiles!

Enjoy this footage of their show which I proudly became part of!

What’s he building in there…

This website uses cookies to improve your experience while you navigate through the website. Out of these cookies, the cookies that are categorized as necessary are stored on your browser as they are essential for the working of basic functionalities of the website. We also use third-party cookies that help us analyze and understand how you use this website. These cookies will be stored in your browser only with your consent. You also have the option to opt-out of these cookies. But opting out of some of these cookies may have an effect on your browsing experience.
Necessary Always Enabled
Necessary cookies are absolutely essential for the website to function properly. This category only includes cookies that ensures basic functionalities and security features of the website. These cookies do not store any personal information.
Non-necessary
Any cookies that may not be particularly necessary for the website to function and is used specifically to collect user personal data via analytics, ads, other embedded contents are termed as non-necessary cookies. It is mandatory to procure user consent prior to running these cookies on your website.
SAVE & ACCEPT