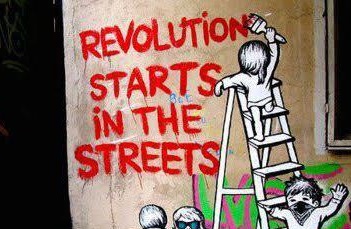 Late 2010 the very interesting Jasmin Revolution started in Tunisia because of an absolute call for freedom by Mohammed Bouazizi, after a series of oppression by the government he set himself on fire in front of the building on the streets of his hometown. He died early 2011 but not before he unchained a revolution throughout the country and president Ben Ali had to flee asap. The fall of Dictators in several countries followed which we call ‘The Arab Spring’. This started the bloody revolution in Syria which is still ongoing under the power of President Assad.

A revolution starts in the streets and Duikersloot wanted to show the locals that its working and spread out the Fist of Revolution throughout graffiti artists worldwide. The goal was to spray the stencil in so many countries that local news and so global news would show the Middle East that they’re not alone.

A two year Art Project followed with graffiti / photoshoot exchanges with locals, exhibitions, graffiti workshops and a press interview in 52 countries. Late 2012 when the graffiti’s ended, Dictators refused to listen to the people and the violence grew, people became refugees and needed to flee to neighbor countries and far into Europe. The UN and world leaders are stuck in their own web and Media made it hard to believe anything. So in the end the collected footage is placed on https://www.facebook.com/graffitirevolution/

What’s he building in there…

Any cookies that may not be particularly necessary for the website to function and is used specifically to collect user personal data via analytics, ads, other embedded contents are termed as non-necessary cookies. It is mandatory to procure user consent prior to running these cookies on your website.